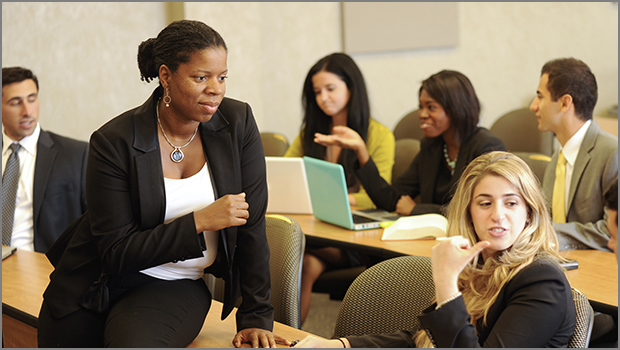 Associate Professor of Law Akilah Folami’s article titled “From Habermas to ‘Get Rich or Die Tryin’: Hip Hop, the Telecommunications Act of 1996, and the Black Public Sphere” was cited in the “Spiritual Temperature” of Contemporary Popular Music: An Alternative to the Legal Regulation of Death-Metal and Gangsta-Rap Lyrics, 11 Vand. J. Ent. & Tech. L. 335, 398 (2009).

ABSTRACT from SSRN
This Article explores the manner in which gangsta rappers, who are primarily young urban Black men, navigate the mass media and rap’s commercialization of the gangsta image to continue to provide seeds of political expression and resistance to that image. While other scholars have considered the political nature of rap in the context of the First Amendment, this Article’s approach is unique in that it is the first to explore such concepts through the lenses of Habermas’ ideal public sphere and those of his critics. While many have written gangsta rap off as being commercially co-opted or useless given its misogyny, violence, and unbridled exhortation to material consumption, “political” expression, resistance and social commentary can still be found therein. This resistance and social commentary can be found when gangsta rap is analyzed within the broader framework of the public sphere, particularly given the invisibility and marginalization of Black men in much public space in America, and the entangled relationship between gangsta rappers, the market, and the mass media.

In addition, this Article is the first to consider the Telecommunications Act of 1996 within the context of hip hop and its contribution to the proliferation of gangsta rap and to dissuading the voices of more “positive” rappers that would contest such gangsta rap. Contrary to Habermas’ view that the law facilitates communication in the public sphere, and between the public sphere and the dominant society, the Telecommunications Act has contributed to stifling discourse within the hip hop community by increasing and solidifying corporate media conglomeration and control of the nation’s radio airwaves. This conglomeration has been instrumental in creating the dominant gangsta image that has become, for the most part, the defacto voice of contemporary hip hop culture. In order to achieve the participatory democracy that Habermas and others envisioned, a wider understanding of political expression and resistance must be embraced, and the law, specifically, the Telecommunications Act, must not inhibit the articulation of alternative voices within the hip hop community that might resist, or provide a counter-hegemonic expression, to gangsta rap, and the resulting, gangsta image.