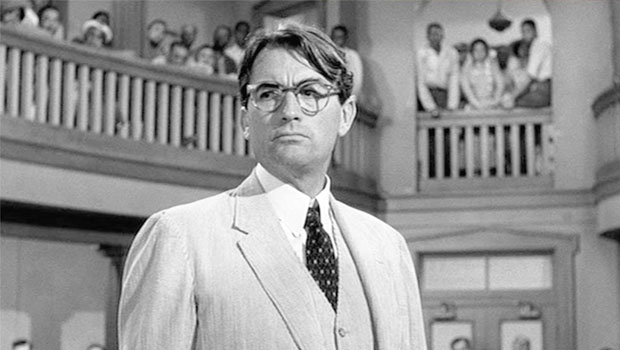 The Courthouse Ring
Atticus Finch and the limits of Southern liberalism.
by Malcolm Gladwell
The New Yorker
August 10, 2009

EXCERPT:
In the middle of the novel, after Tom Robinson’s arrest, Finch spends the night in front of the Maycomb jail, concerned that a mob might come down and try to take matters into its own hands. Sure enough, one does, led by a poor white farmer, Walter Cunningham. The mob eventually scatters, and the next morning Finch tries to explain the night’s events to Scout. Here again is a test for Finch’s high-minded equanimity. He likes Walter Cunningham. Cunningham is, to his mind, the right sort of poor white farmer: a man who refuses a W.P.A. handout and who scrupulously repays Finch for legal work with a load of stove wood, a sack of hickory nuts, and a crate of smilax and holly. Against this, Finch must weigh the fact that Cunningham also leads lynch mobs against black people. So what does he do? Once again, he puts personal ties first. Cunningham, Finch tells his daughter, is “basically a good man,” who “just has his blind spots along with the rest of us.” Blind spots? As the legal scholar Monroe Freedman has written, “It just happens that Cunningham’s blind spot (along with the rest of us?) is a homicidal hatred of black people.”

“Atticus Finch — Right and Wrong” was also reprinted in the Critical Insights series of books by EBSCO Publishing (2009).

Previously, Professor Freedman’s critique of Finch was reprinted by Yale Professor Harold Bloom in his book of commentaries on To Kill a Mockingbird. It was also excerpted in another book, Law and Popular Culture (2007).