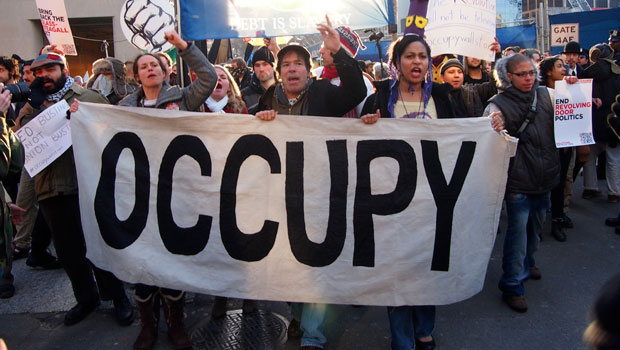 “By agreement with the City, Judge Harold Baer of the United States District Court for the Southern District of New York has recently entered a judgment against the City of New York in the amount of $25,001 to Occupy Wall Street protester Sade Adona for injuries she sustained in a demonstration that took place on October 26, 2011. In her Complaint in the case, Ms. Adona alleged that members of the NYPD falsely arrested her during that protest and unconstitutionally used excessive force in her arrest. In the case, the City also agreed to a judgment of attorneys’ fees of $24,000 for the Hofstra Law Clinic and $11,000 to Gideon Oliver.”

Like so many of their peers, Hofstra Law students took a keen interest in the Occupy Wall Street (OWS) demonstrations. Through a special clinic developed by Professor Stefan Krieger, a group of committed students applied their legal expertise to assist this OWS plaintiff. Faculty in the Criminal Law, Youth Advocacy, Community and Economic Development, and Mediation clinics joined in the supervision of the students and shared their unique expertise on the different issues raised by OWS.

“The OWS Clinic’s victory proves that when, as legal educators, we provide experiential-learning opportunities in areas they are passionate about, law students can effect positive change in the world around them,” said Krieger.

“My fellow law student Jenelle Devits ’13 and I had been fired up about OWS since its inception in September of 2011, and I thought this project would be a great way to combine my growing legal knowledge with my interest in the rights of the OWS protestors,” said Judith Massis-Sanchez ’13.

The students in the OWS Clinic reviewed the case, drafted documents and conducted research — which included watching the many videos posted on YouTube that showed their client to help identify her alleged attackers — sitting down with professors and spending time speaking with the client. They also negotiated with the opposing counsel and argued the case at a pretrial conference with Judge Baer.

“The clinic gave us confidence that we know how to investigate and file a complaint,” said Devits. “It was eye-opening in seeing how slowly the judicial process goes and how doing this without a legal background would be nearly impossible. I can’t imagine someone without counsel not being intimidated.”

The OWS Clinic has already started on its next case.