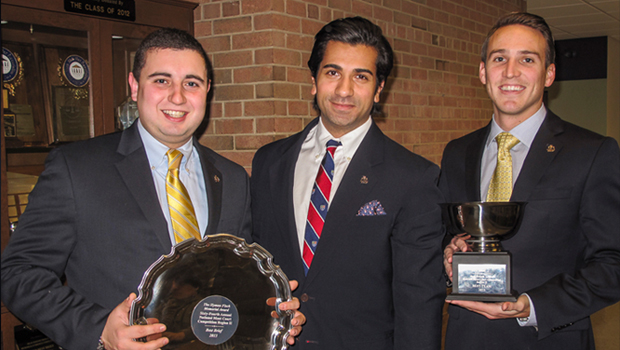 The team, which has competed together in past competitions, won all four rounds, defeating 15 other law schools from the tri-state region. They advance to the National Finals, which will take place at the New York City Bar on February 10-13, 2014.

“The team dynamic was phenomenal,” said Liggieri, who also won Best Oral Advocate honors. “Competing together in the past really helped, and our coaches were so helpful.”

“Competing on an interscholastic moot court team is one of the most valuable and rewarding experiences in law school,” said Boxler. “I can’t wait to compete with this group in the finals.”

“Winning all four rounds of the competition shows the Law School’s strengths not only in oral but in written arguments,” said Professor Barbara Barron, the director of the Trial Techniques Program and the faculty advisor for the Moot Court Board. “We have had great success the past few years in both moot court and trial competitions. I am so proud of the students.”

Since 1950, the New York City Bar and the American College of Trial Lawyers have sponsored this National Moot Court Competition. Every year, over 150 law schools compete in the regional rounds throughout the U.S., and the winners advance to the final rounds held at the New York City Bar. This widely recognized National Moot Court Competition allows law students to hone their appellate advocacy skills by arguing before prominent members of the legal profession.