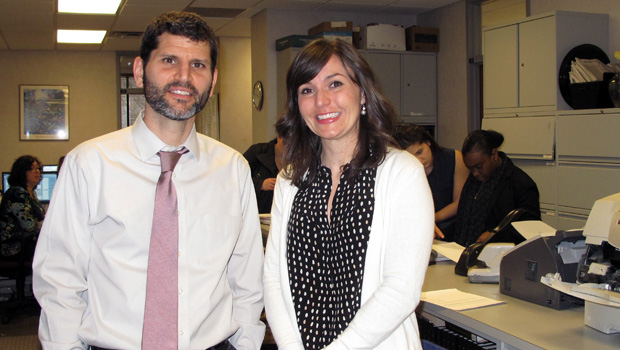 Hofstra Law students in the Youth Advocacy Clinic helped a mother gain legal guardianship of her three children who had been living under the constant threat of gang violence in their native El Salvador.

Lauren Wylie 3L and former student Erika Ewing, under the guidance of Professor Theo Liebmann, represented three minors from El Salvador who had been living in this country without lawful immigration status and were at risk of deportation.

“The opportunity to advocate for this family was one of my greatest law school experiences, and has taught me that advocacy must be client-centered.”

“Working with Professor Liebmann has been an incredible learning opportunity,” said Wylie. “The opportunity to advocate for this family was one of my greatest law school experiences, and has taught me that advocacy must be client-centered.”

Wylie and Ewing argued on papers and in court that their clients’ mother should be appointed as their legal guardian, but the Nassau County Family Court denied their request without a full hearing in May 2013.

Recently, the Second Department overturned the Family Court decision, thanks primarily to the detailed and thorough record that Wylie and Ewing had made, and remanded the case for hearing. This is the first step toward obtaining lawful permanent residence in the United States for the juveniles.

The decision firmly clarifies that children who are seeking lawful immigration status as a special immigrant juvenile can petition to have their own parents appointed as their guardians — a widely debated question in New York Family Courts.

“Knowing that the decision has established a foundation for other abused and neglected children, like these children, to have access to Special Immigrant Juvenile Status makes me very proud to have been a part of this,” said Wylie.

The case was profiled in the New York Law Journal.