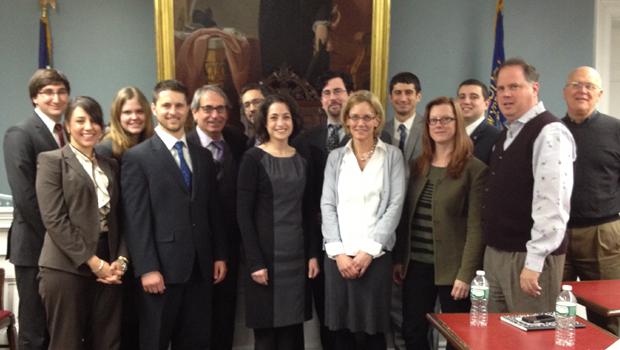 On March 18, 2014, eight students from the Maurice A. Deane School of Law traveled to Columbia County in upstate New York to meet with Mayor William Hallenbeck Jr. and other officials from the City of Hudson. The trip was a field visit for Special Problems in Municipal Law, a course taught by Professor Ashira Ostrow.

The seminar was developed by Dean Eric Lane after he was asked by Cheryl Roberts, Hudson’s corporation counsel, to consult on revising the city charter. After a series of discussions with Roberts over the course of the semester, Ostrow and the students identified four issues as their research topics, and two students were dedicated to researching each issue:

On the day of the field visit, from 10 a.m.-5:30 p.m. Ostrow and the students met with the mayor; the Common Council president and Economic Development Committee chairman; the Public Works Department superintendent; the city treasurer; the county supervisor, 5th Ward (a former mayor); the County Ethics Committee chairman; and a community activist (and former mayoral candidate). Before breaking for dinner, they also took a walking tour of the city. They concluded the visit by attending a public hearing of the Common Council.

Piccininni also had an opportunity to meet separately with Alderman David Marston to discuss conservation efforts in Hudson. He went back to Hudson on March 21 to meet with the Columbia Land Conservancy to pitch more ideas for conservation of the Hudson River Ecosystem.

Ostrow and the students will return to Hudson in May to present their findings and recommendations.

Ruscito summed up the significance of the field visit: “It wasn’t until we went to Hudson that, I believe, we really understood that this project is for the people, both the citizens of Hudson and the public servants that represent them. Seeing the interest, passion and enthusiasm these officials have for the law made this project real. We’re going to impact this city.”

Read a Hudson Register-Star article about the seminar and field visit.