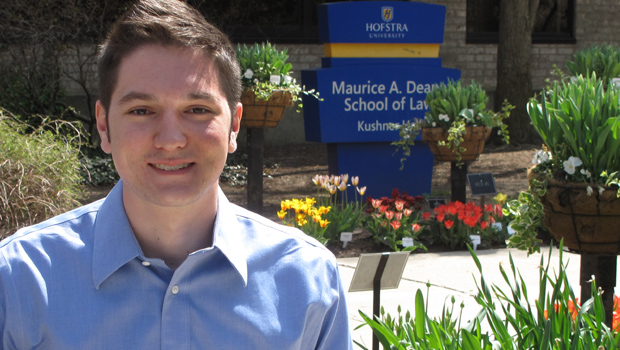 The Peggy Browning Fund has awarded a 10-week summer fellowship to Hofstra Law first-year student Anthony Schroth. He will spend the fellowship working at the Farmworker & Landscaper Advocacy Project in Chicago.

Peggy Browning Fellows are distinguished students who have not only excelled in law school but have also demonstrated their commitment to workers’ rights through their previous educational, work, volunteer and personal experiences.

Schroth worked with his landscaper father oftentimes in the summers, which instilled in him an appreciation for the hard work and the poor working conditions of the migrant worker. He has spent most of his adult life volunteering at the Epilepsy Foundation of Greater Cincinnati and Columbus.

He volunteers now at Make the Road New York, where he assists immigrants in filing applications to the Deferred Action for Childhood Arrivals program.

At Hofstra Law, Schroth is a member of the Immigration Law Society and the Christian Law Society. His involvement in these groups has brought him experiences ranging from simple prayer groups to clinics working to defer deportation of immigrants.

“With age has come the understanding that I have the potential to change such mistreatment,” said Schroth, “and I look forward to using my abilities and passion to fix a problem that I previously thought unfixable.

In 2014, the Peggy Browning Fund will support nearly 70 public interest labor law fellowships nationwide. With hundreds of applicants from over 140 participating law schools, securing a Peggy Browning Fellowship is competitive.