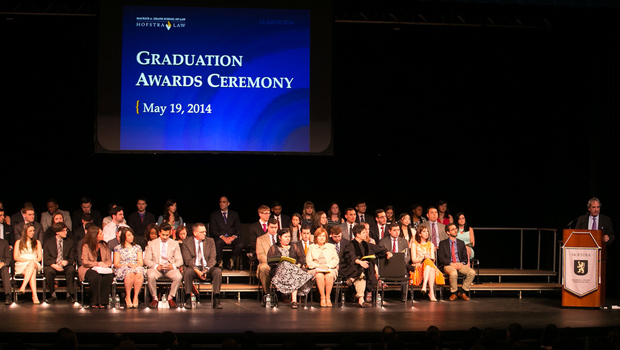 The Maurice A. Deane School of Law at Hofstra University held its annual Graduates Celebration and Awards Ceremony on Monday, May 19, 2014. Administrators, faculty members, friends and families joined Hofstra Law graduates at the John Cranford Adams Playhouse at Hofstra University to honor their outstanding achievements as law school students.

Teacher of the Year James Sample, associate professor of law, delivered remarks encouraging students to use their law degree as an opportunity to “both personally and professionally empower those who feel, at least comparatively, powerless” and to “strive for the kind of success that comes from lifting others up, as opposed to striking them down.”

Later that evening, Hofstra Law alumna Judith A. Livingston ’79, senior partner at Kramer, Dillof, Livingston & Moore, delivered the commencement address to more than 300 J.D. and LL.M. degree recipients at the David S. Mack Sports and Exhibition Complex at Hofstra University. Livingston discussed her pride in “trying cases and fighting for those who can’t fight themselves” and in “being the voice for those who have no voice.” She said her wish for the graduates is that they will take similar pride in both their work and Hofstra Law degree throughout their careers.

The following select 2014 graduation awards were presented at the Graduates Celebration and Awards ceremony: