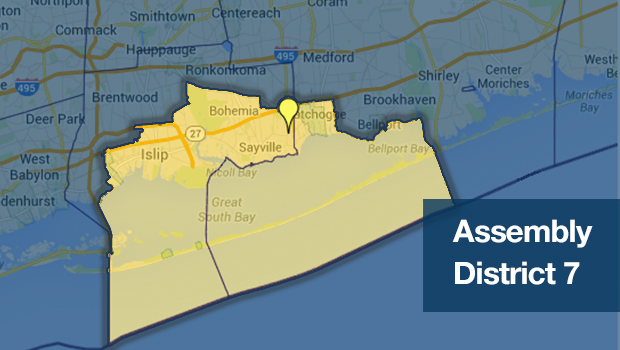 His father was a lawyer, and Garbarino grew up watching him help solve people’s problems. After graduating from George Washington University with a B.A. in history and classical humanities, he decided to follow in his father’s footsteps and become a lawyer.

Just five years after graduating from Hofstra Law, Garbarino has already made an impact helping others through his family’s law firm in Sayville and by serving his constituents in the 7th Assembly District.

A lifelong resident of Sayville, Garbarino says he decided to attend Hofstra Law “because it always had a great reputation for its classes and professors.” Many of the lessons he learned in his legal classes not only prepared him for practice, but “have proved to be paramount to solving everyday problems in my community as well as the State.”

“Being able to understand legal writing has allowed me to fully understand the intent and implications — both intended and unintended — of the many bills I review in Albany.”

Garbarino, who was just 27 years old when he was elected to the Assembly, relies on the critical-thinking skills he developed in law school as he navigates his first term representing the 7th District. He says: “Being able to understand legal writing has allowed me to fully understand the intent and implications — both intended and unintended — of the many bills I review in Albany.”

What Garbarino says he enjoys most about his career in the Assembly is that “although I am in the minority, I am still able to help individual people from my district. I can’t explain how rewarding it is to have someone call my office with a specific problem and to be able to solve it for them.”

Even though his work as a state assemblyman can be time-consuming, the position still allows Garbarino to continue to practice law at his firm, doing land-use and estate tax law. While at Hofstra Law, it was his tax law professors, Mitchell Gans and Linda Galler, who influenced the direction of Garbarino’s career.

“They made me love and understand tax law,” says Garbarino. “That has helped me immensely both in private practice and in the state Legislature.”

Garbarino is also active in local civic life as a member of the Sayville Rotary Club and Knights of Columbus. He serves on several legislative committees, including Racing and Wagering, Banks, Environmental Conservation, Economic Development, and Higher Education.

What has Garbarino learned during his first term in the state Assembly?

“Challenges always exist in government service,” he says. “Specifically, maintaining the balance of keeping my constituents happy with my performance and doing what I think is right can be very difficult to do, but I believe that every vote I have taken is one that was right for both my constituents and me.”