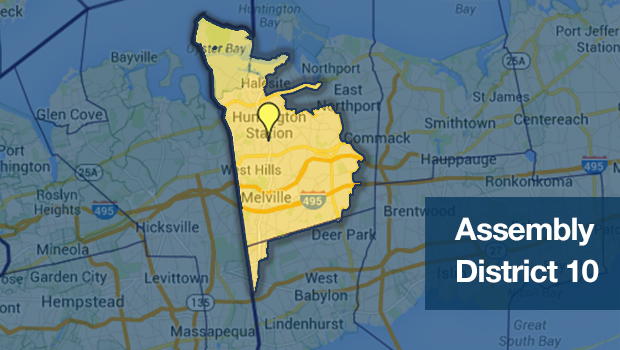 Assemblyman Chad A. Lupinacci ’04 is a proud Hofstra alumnus. In addition to his J.D., he also holds a B.A. and an M.B.A. from Hofstra University. These degrees, Lupinacci has found, are great assets to his service in the Assembly and his legal career.

In addition to his role as an assemblyman, Lupinacci has been in private legal practice specializing in the areas of wills, trusts and real estate transactions since 2005.

Unsurprisingly, his favorite classes at Hofstra Law were Trusts and Estates, and Property. He recalls, “Not only did I find these classes to be intellectually challenging, but I knew they would be a vital part of my future legal practice.”

He says that his fulfilling practice in the areas of real estate and trusts and estates is “thanks in large part to the solid education received at Hofstra.”

Lupinacci also believes that having a legal education is truly an asset as a legislator.

“My training in the law at Hofstra enables me to analyze complex public policy issues, while remaining cognizant of the proper role of government in our society,” he says. “Having a strong grasp of our legal system is an essential component to navigating the various levels of government and the competing interests constantly at play.”

“My training in the law at Hofstra enables me to analyze complex public policy issues, while remaining cognizant of the proper role of government in our society.”

Lupinacci not only has had a thriving legal practice and an important government role for over 10 years, but he has also taught many college classes in political science, law and business at local institutions, including Hofstra, St. Joseph’s College, Suffolk Community College and Farmingdale State College.

He has found that a career in public service allows him to bring his experiences into the classroom as a professor. “As a professor, I enjoy helping students along in both their academic and professional careers,” he says. “Nothing is more gratifying than having a positive impact on someone’s life.”

Drawing on his background in politics, law and education, Lupinacci has valuable advice for law students: “Despite the risk of sounding like a broken record, the secret to success is more often than not attained through networking.”

He has found that some of the best ways to build a network and to enter the political arena are to join a local political party or volunteer on a campaign.

Lupinacci also believes that “patience and persistence are key elements in any pursuit, especially when competing for employment in these times.”