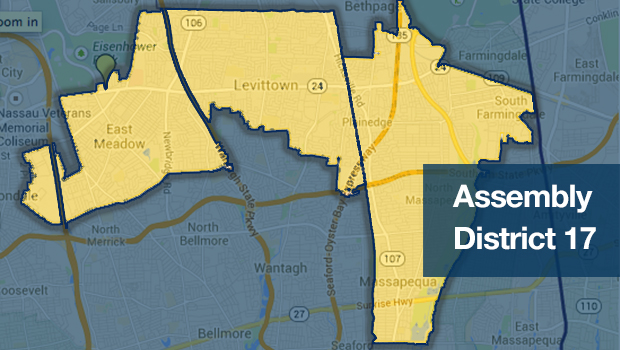 Assemblyman Tom McKevitt ’96 is an example of how going to law school can jump-start your career. McKevitt credits Hofstra Law with enabling him to obtain his first job at the Town of Hempstead.

While the Law School aided him in securing employment, it is the skills and lessons McKevitt learned at Hofstra Law that have helped him throughout his career in public service.

A lifelong resident of Nassau County, McKevitt chose Hofstra Law because it allowed him to continue to be politically active on the local level. “I believed a law degree would help further a career in government service,” he says, “and Hofstra Law certainly helped that become a reality.”

“I believed a law degree would help further a career in government service, and Hofstra Law certainly helped that become a reality.”

At Hofstra Law, McKevitt served as editor of the Hofstra Law Review. Recalling his law school classes, he says, “Watching Professor Vern Walker teach a torts class was like watching a maestro conducting an orchestra. I am awed to this day as to how he utilized the Socratic method, which not only tested one’s intellectual abilities, but also trained me to think critically like a lawyer.”

Additionally, McKevitt served as a research assistant to Professor Roy D. Simon, who at the time was the chair of the Municipal Ethics Committee of the Nassau County Bar Association.

“Professor Simon encouraged me to become active there, which I continue to be to this day,” he notes. “Forming relationships with other attorneys outside the strict practice setting benefits one’s growth in the profession.”

McKevitt has had many opportunities to form relationships through his work in various associations and government positions, including the American and New York State bar associations, and as deputy town attorney for the Town of Hempstead. In 2006 he was elected to the Assembly to serve District 17.

He says that there are challenges to his role as a dedicated public servant: “Politics has become more partisan and divisive over the years, and this becomes increasingly frustrating at times. Financial resources on all levels of government are very finite today, and that makes performing essential services very challenging.” Nonetheless, he remains committed to continuing to work to serve the people.

What is life in the Assembly like for McKevitt?

“Every day is a new adventure where you do not know who you will meet next or what new issue you must learn about,” he says. “Once in a while — although not as often as I would like — you are able to help a person in a difficult situation and make a real positive difference in that person’s life.”