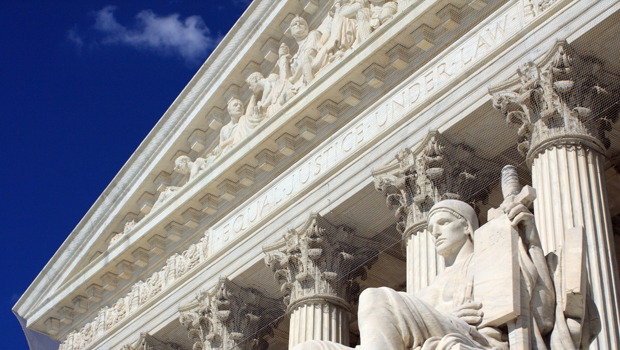 What’s a Reasonable Way to Kill Someone?
As prisons run out of drugs for execution by lethal injection, the Supreme Court considers a case that could reshape the death penalty
By Matt Stroud
Bloomberg
April 29, 2015

The U.S. Supreme Court heard arguments today in the latest high court case about capital punishment, addressing some of the most contentious questions over lethal injection—and possibly reshaping the death penalty.

The case, Glossip v. Gross, is named for Richard Glossip, a convicted murderer, and three prisoners who filed a lawsuit in June 2014 in Oklahoma district court. The suit alleges that the use of a drug in their impending executions violates the Eighth Amendment’s ban on cruel and unusual punishment. Their argument centers on the botched execution in April 2014 of Clayton Lockett, convicted of raping and murdering a 19-year-old woman in 2000.

In Glossip v. Gross, the Supreme Court won’t ban capital punishment. But it may go beyond simply saying whether midazolam is constitutional, says Eric M. Freedman, a law professor at Hofstra University who lectures and writes about death penalty issues.

“The justices take roughly 80 cases per year, and they hate to waste those cases by issuing opinions that do not give some general guidance to the world,” he says. “It’s possible that simply saying ‘midazolam is no good’ might not be good enough and that instead, they will offer that a good alternative to midazolam should have these specific characteristics.”

What You Need To Know About The Supreme Court Lethal Injection Case
By Kim Bellware
The Huffington Post
April 29, 2015

How we got here
Currently 32 states have the death penalty, and all of them use lethal injection as the primary method of execution. For years, states used a fairly similar three-drug protocol in which the first drug, sodium thiopental (also know as sodium pentathol), was used to render the inmate unconscious, a second drug stopped respiration, and a third drug essentially induced cardiac arrest. In the 2008 case Baze v. Rees, which challenged that protocol, the court ruled in a 7-2 decision that Kentucky’s protocol did not violate the Eighth Amendment barring cruel and unusual punishment.

Nevertheless, drug manufacturers decided either to stop selling sodium thiopental to prisons or to stop making the drug altogether, forcing departments of corrections to look for alternatives.

Eric M. Freedman, a professor of constitutional law and history at Hofstra University, told The Huffington Post Tuesday that in the wake of Baze, a patchwork of protocols sprang up where there previously had been just one.

Now many states use midazolam as part of a three-drug protocol. Other states, like Georgia, have started using lethal doses of the barbiturate pentobarbital on its own.

“Baze was a spectacular failure because [the court] didn’t provide clear guidance to anyone,” Freedman said.

Possible outcomes
Abolitionists who hope the court will strike down the death penalty entirely will almost certainly be disappointed by the ruling: All the experts interviewed by The Huffington Post agreed that SCOTUS tends to write its opinions narrowly and is unlikely to address any wide-ranging questions about the death penalty.

Freedman said the court has an interest in ruling narrowly if they want a consensus.

In 2014, Richard Glossip, a convicted murderer, and three other prisoners filed a lawsuit in Oklahoma to determine the constitutionality of midazolam, but it’s likely the Supreme Court’s decision will go beyond that.

“The justices take roughly 80 cases per year, and they hate to waste those cases by issuing opinions that do not give some general guidance to the world,” Eric M. Freedman, a law professor at Hofstra University who lectures and writes about death penalty issues, told Bloomberg.

“It’s possible that simply saying ‘midazolam is no good’ might not be good enough and that instead, they will offer that a good alternative to midazolam should have these specific characteristics.”