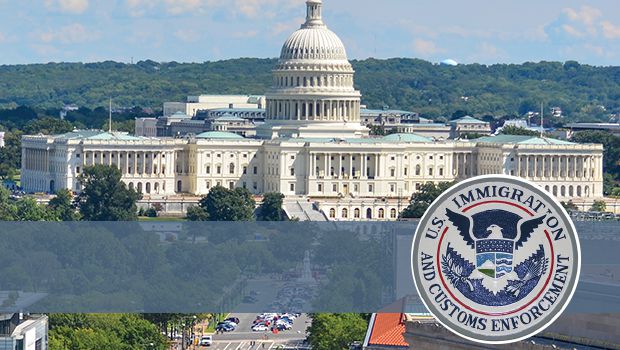 An HLDC Externship With U.S. Immigration and Customs Enforcement (ICE) 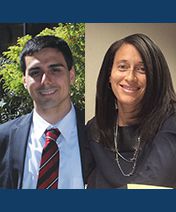 Graduating from Hofstra Law in 2002, Monica Austin Vignier, an associate legal advisor at U.S. Immigration and Customs Enforcement (ICE), didn’t know she would one day be an immigration lawyer. “I actually started my career practicing child welfare law,” she explains. A move to Arizona prompted Vignier to look for a position in federal law enforcement, and she obtained a post at an ICE field office in the Phoenix area.

While working at ICE offices in both Arizona and Washington, D.C., Vignier actively stayed in touch with Hofstra Law, and in 2013 she was contacted to participate as a mentor in the Hofstra Law in D.C. (HLDC) Externship Program. In the fall semester, her office accepted full-time externs from several schools, including third-year Hofstra Law student Alex Carrion.

Carrion had heard about the program from a classmate who had previously externed at ICE. “I had a really strong feeling that I would gain a perspective of immigration law that I hadn’t had before with this program,” he says.

Carrion was first introduced to immigration law during the Citizenship Day workshop, which was hosted at the Make the Road Center and coordinated by the Central American Refugee Center (CARECEN). He didn’t expect to connect to immigration law so keenly, but thinking back on the workshop, he says, “I really liked talking to the clients … and being able to help someone immediately.”

Immigration policy is not only an interest of Carrion’s, but also a subject that hits close to home. His parents are from Colombia and Ecuador, and he mentions that immigration issues come up often in conversations in their household.

Once Carrion discovered that immigration law was what he wanted to pursue, he was eager to explore advocacy, government service and private practice within the focus. “The more I researched immigration law,” he says, “the more I was interested in its current events and its potential for growth and significant change in the next couple of years.”

Working as an extern at ICE this past semester allowed Carrion to be immersed in field. From helping prepare red notices to observing the way in which circuit courts interpreted the precedent of a recent Supreme Court case, Carrion had an up-close view of working at a federal agency.

YOU’RE NOT GOING TO GET ANY BETTER EXPERIENCE THAN PURSUING A PROGRAM IN A LEGAL ENVIRONMENT FULL TIME. IT’S INVALUABLE AND IT GIVES THE STUDENTS WHO PARTICIPATE IN IT A LEG UP AS THEY’RE PURSUING THEIR CAREERS.

“We try to give [externs] a wide variety of assignments,” says Vignier. “We definitely don’t want to give them mundane administrative tasks, but actually give them assignments that attorneys in the office would otherwise be handling.”

Not only is the HLDC program beneficial to the students, but the program mentors are often invigorated by the experience. “It’s a good reminder, when you’re particularly with students, that there are different ways to handle research and writing within an office,” says Vignier. “You always have to be flexible on how things are done and argued. It’s nice to see how, while I may look at an issue one way, an extern can look at something from a fresh perspective … that’s helpful to me.”

Both Carrion and Vignier agree that while classes and reading are pertinent to a law student’s education, an opportunity in a real-world law environment completes it. “I think it’s important for students to get into an office setting and learn about what tools they need to be successful as an attorney,” says Vignier.

Referring specifically to the HLDC program, she adds, “You’re not going to get any better experience than pursuing a program in a legal environment full time. It’s invaluable and it gives the students who participate in it a leg up as they’re pursuing their careers.”