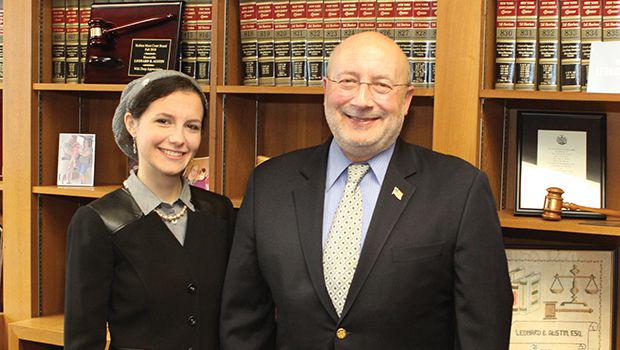 A Judicial Externship With the New York Appellate Division

Since 1999 the Honorable Leonard B. Austin ’77 has served as a judge for the State of New York. Before his election to the Supreme Court, he spent two decades as a litigator with a focus on commercial litigation and matrimonial and family matters. He is now an associate justice of the Appellate Division, Second Department, where he hears a variety of appealed cases, while also teaching Litigation Drafting Skills as a special professor of law at Hofstra Law.

“I started taking interns almost from my first day on the bench,” says Judge Austin, who reached out to his alma mater even before Hofstra Law had a formal externship program. “There is a serious view that putting students in a judge’s chamber and giving them the opportunity to learn and work is a valuable learning experience.”

One of the externs who joined Judge Austin this year was third-year Hofstra Law student Olga Polivoda. She cites her curiosity about how New York’s court system functions as one of her reasons for applying for an externship position with an Appellate Division judge.

Polivoda also chose to extern for an Appellate Division judge for a less obvious reason. “My goal is to work in the business transactional process,” she says. She adds that her externship position has allowed her to see the inner workings of the court, from listening to oral arguments on underlying transactions to contract disagreements. These sessions are vivid introductions to the challenges that arise in business dealings, which Polivoda recognizes she is bound to encounter as a business law practitioner.

“It’s a great educational tool for Olga,” says Judge Austin. “She can see what works and what affects a panel versus what doesn’t.” He adds that many appellate court attorneys are exceptional orators and that viewing them in their element is an enriching experience for students.

Besides listening in on and taking notes during oral arguments, Polivoda is enlisted by Judge Austin to help him prepare for upcoming cases. “The externship teaches you that there aren’t two judges who are alike, nor are there two lawyers,” he says. “It gives students the opportunity to learn to some degree to adapt to the person with whom they’re working.”

AT FIRST GLANCE, WHEN YOU LOOK AT THE COURTS THEY SEEM UNAPPROACHABLE AND SCARY, BUT I FEEL THAT THROUGH THIS EXPERIENCE I WAS ABLE TO SEE A HUMAN ELEMENT OF THE COURT.

Polivoda assists the judge by researching previous related proceedings and applicable legal issues. One assignment that was particularly significant for both the judge and the extern was a comprehensive memo on dog bites written by Polivoda, which later developed into a 30-page opinion about liability.

Judge Austin makes it a point to review Polivoda’s findings with her, suggesting how she can strengthen her writing and discover alternative perspectives within an issue or case. “It’s very valuable to receive feedback from a practicing justice,” says Polivoda, “especially in the development of my legal writing.”

Though the extern is still in the early stages of establishing her legal voice, Judge Austin encourages Polivoda to not overthink things. “Like most young lawyers, she examines it to the nth degree,” he points out while commending his protégé’s diligence. “That is a luxury that a practicing lawyer and a judge don’t always have.”

Polivoda interjects with a laugh that she is working on improving this skill while deepening her understanding of the appellate court and how it relates to her overall goal. “When you start somewhere new it takes some time to get used to,” Polivoda says, realizing how far she has come since the beginning of her externship. “At first glance, when you look at the courts they seem unapproachable and scary, but I feel that through this experience I have been able to see a human element of the court.”