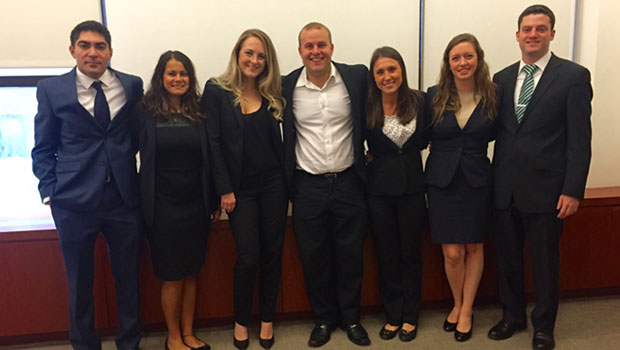 The competition simulates legal negotiations in which law students, acting as lawyers in teams of two, negotiate opposing interests in a series of legal problems.

Izabela Jargilo 2L and Jyllian Schwendeman 2L became the first Hofstra Law team to reach the final round of an ABA competition, ultimately finishing in Second Place in the Northeast Regional.

The other two teams, Cristen Callan 1L and Reza Yassi 1L — the first team of 1L students Hofstra Law has ever sent — and Alyssa Goldrich 2L and Tyler Levenson 2L, placed in the top 10 in the 24-team tournament.

On Oct. 17-18, student teams from law schools around the country met to test their advocacy skills in the negotiation, mediation and arbitration of a securities dispute.

Teams were judged on their effectiveness compared with their adversaries.

The team of Anthony Galli 2L, Fatima Guillen-Walsh 2L and Daniel Stern 2L were found to be more effective by seven of the nine judges.