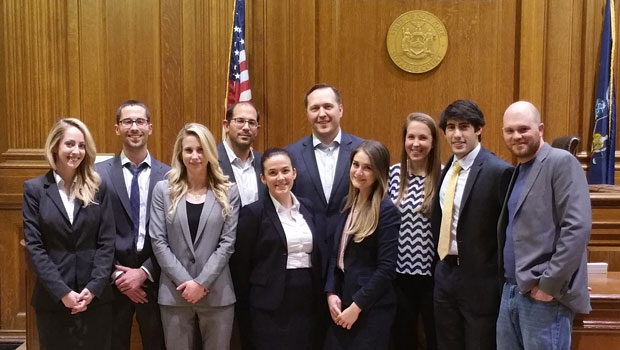 A trial team of Hofstra Law students Helene Weiss 3L, Lauren Reilly 3L and Sean Brucker 2L were co-champions of the New York Regional Round of the 2016 National Trial Competition. The two winning teams advance to the NTC Championship Rounds to compete among the top 28 teams in the country in Dallas, Texas, on March 30-April 3. This is the second consecutive year that a Hofstra Law team has qualified for the championship rounds.

The National Trial Competition was established in 1975 to encourage and strengthen students’ advocacy skills through quality competition and valuable interaction with members of the bench and bar.  The program is designed to expose law students to the nature of trial practice and to serve as a supplement to their education. It is the Texas Young Lawyers Association intent to provide a meaningful contribution to the development of future trial lawyers.