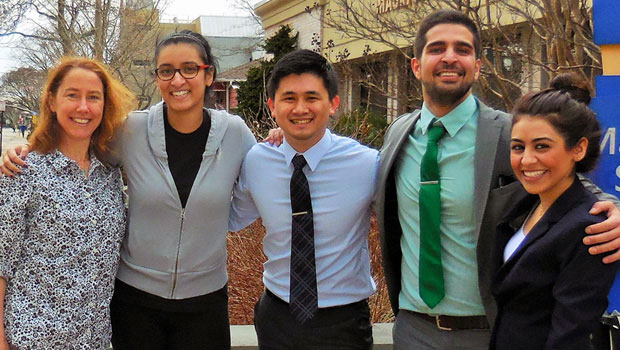 Hofstra Law students in the Asylum Clinic on March 18, 2016, won a lifesaving case for their client, allowing her to stay in the United States and avoid religious persecution in her home country. Under the supervision of Professor Lauris Wren, attorney-in-charge for the clinic, Laraib Butt 3L, Mishal Pahrand 2L, Aman Tekbali 2L and Bryan Young 3L worked on all aspects of the case.

“The students who worked with the client were absolutely dedicated to helping her win asylum so that she could build a new life, in peace and in safety, here in the United States,” said Professor Wren. “The obstacles in our client’s case were overwhelming, but the students overcame them with hard work, creativity and terrific legal work. No attorney could have done a better job for this client or could have cared more passionately about her well-being and the outcome of her case.”

While living in her home country, the client had been in an arranged marriage to an abusive, older man since she was 11 years old and had never been allowed to go to school or consider herself an equal. After a lifetime of abuse and repression, the 63-year-old client had a religious vision and converted to Christianity. With her conversion, she faced danger both from her own family and from others. Her faith gave her the strength to leave everything she had ever known to build a new life in the United States, free to worship safely.

“After witnessing our client cry many tears in our preparation meetings as she explained her lifetime of trauma to us, nothing is more rewarding than seeing the smile on her face as we heard the asylum officer say, ‘Congratulations, you’ve been granted asylum,’ ” said Pahrand. “The consistent meetings with her, the countless hours spent in the clinic and the endless amount of work completed all seemed so satisfying when I realized we saved our client’s life.”