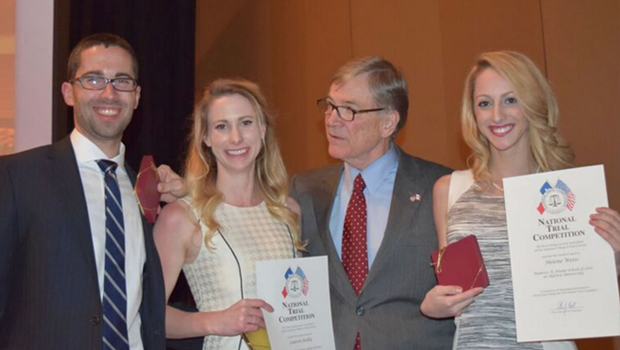 A trial team of Hofstra Law students Helene Weiss 3L, Sean Brucker 2L and Lauren Reilly 3L competed against the top 27 teams in the country in the 2016 National Trial Competition (NTC) Championship Rounds, finishing as the first-place trial team in New York. The team had qualified for the championship rounds, held in Dallas, Texas, on March 30-April 3, as a co-champion in the New York Regional Round earlier this year.

To recognize the team’s finish as the state’s top team, the New York State Bar Association will award it a traveling Tiffany & Co. plaque, and Hofstra Law will be awarded $7,500 and a plaque listing the team members and coaches.

The National Trial Competition is one of the oldest and most prestigious mock trial competitions in the United States. Over 300 law schools in the country are invited to compete in this annual competition. The top two teams from each of the 14 regional tournaments advance to the championship rounds in Texas. This was the second consecutive year that a Hofstra Law team was a co-champion in the New York Regional Round.