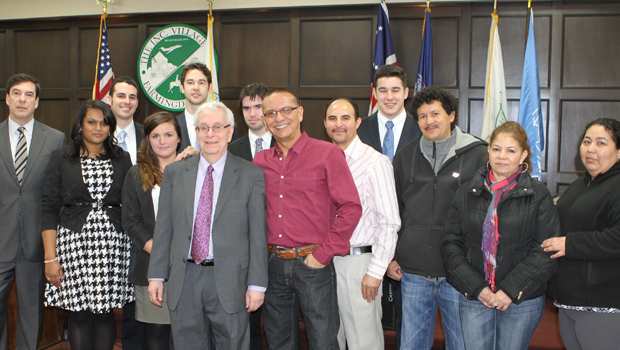 The Law Reform Advocacy Clinic at the Maurice A. Deane School of Law has been awarded the prestigious 2016 CLEA Award for Excellence in a Public Interest Case or Project. The clinic, led by Professor Stefan Krieger, was recognized for its completion of a groundbreaking, multi-plaintiff housing discrimination litigation that lasted for over 10 years.

“I am honored that CLEA has recognized the Hofstra Law Reform Advocacy Clinic with this award,” said Krieger. “The Farmingdale settlement marks the first time on Long Island that a local government actively pushed developers to create housing for very low income residents.”

In 2004, the Workplace Project, a local immigrant-rights community organization, referred tenants at 150 Secatogue Avenue to the clinic for help in addressing the deplorable conditions in the building. After learning of the Village of Farmingdale’s redevelopment efforts, the clinic expanded its representation to challenge the planned displacement of the tenants from the building.

The clinic filed a Fair Housing Act case in federal court on behalf of nine former tenants, alleging that the village’s plans for the building intentionally targeted Latinos and that the developer and owner acted in concert with the village in its discriminatory plans. The case settled before trial with a consent decree that was an extraordinary victory for the clients.

The case set several significant precedents. Notably, for the first time in a written opinion in a housing discrimination case, a federal court recognized that plaintiffs displaced from their community because of discrimination can be awarded damages for “loss of enjoyment of life.”

In addition to a substantial monetary award, each plaintiff was guaranteed housing in new developments, and the village agreed to set aside housing for low- and moderate-income residents.

At least one of the Hofstra Law clients has applied for residency in June. Additional units are now in the pipeline, and over a 10-year period, a total of 54 units will be allocated to low-income residents, with those displaced from 150 Secatogue Avenue given first priority.

The CLEA award will be presented on May 2 at a luncheon during the Association of American Law Schools (AALS) Clinical Conference in Baltimore.

Annually, CLEA (Clinical Legal Education Association) honors a case or project that truly contributes to the public good, effectively calls attention to or significantly redresses a high-priority need of underserved or low-income residents or communities, or makes a notable or meaningful contribution to the advancement of civil rights, civil liberties, human rights, legal services for the underrepresented, environmental protection, or consumer protection.

About the Hofstra Law Reform Advocacy Clinic
Under the supervision of Professor Stefan Krieger, students participating in the Hofstra Law Reform Advocacy Clinic handle housing, community-development and public interest cases for low-income individuals and community organizations in areas such as fair housing and exclusionary zoning, housing rehabilitation, housing conditions and housing discrimination. The clinic focuses on cases that will have an impact for low-income individuals on Long Island, especially new immigrants.