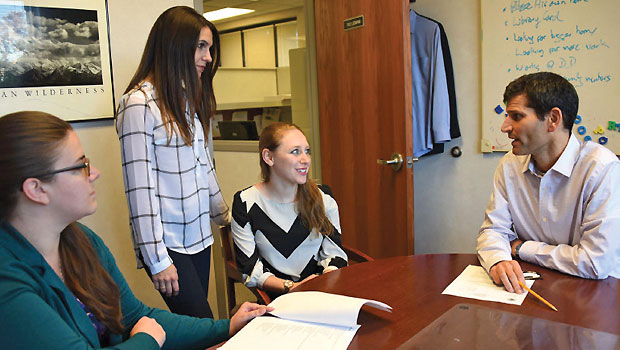 The New York court system, slammed with a growing number of family petitions from immigrants, is for the first time convening a statewide panel of legal experts to recommend best practices in those cases.

The Advisory Council on Immigration Issues in Family Court, made up of about 20 lawyers and judges from the legal and advocacy communities, will be co-chaired by Theo Liebmann, a Long Island professor who directs the Youth Advocacy Clinic at Hofstra University.

The council, set to meet on Nov. 12, was largely formed out of a need for consistent directives and procedures as judges hear a large number of cases from immigrant children across New York. The increased need for the court’s involvement in immigration matters has partly resulted from the influx of unaccompanied minors who have come to the state fleeing poverty, violence and abuse in their home countries in Central America.

Family courts decide on issues that affect children, parents and spouses, in cases ranging from custody and visitation to guardianship requests and hearings on domestic violence.

“The advisory council is essentially a body that will be proposing rules or issuing memos in response to concerns by litigants, by the judges and by the attorneys that are related to immigration issues in the family court,” said Liebmann, whose clinic helps minors petitioning to stay in the United States.

“For our clients,” Liebmann added, “you are talking about enabling them to remain here, to not have to go back to their countries, where they came from to escape real violence.”

Findings in family courts have a bearing on the outcome of visa petitions and deportation proceedings in federal immigration courts. Those cases bring new sets of challenges, as petitioners can be people in the country illegally or those who hold a type of temporary status.

The new panel will consider a range of issues. Some will be procedural — for example, reaching agreement on methods by which immigrants without legal status can prove their identity so they can be fingerprinted. Others will deal with such practical matters as providing information in languages other than English.

Judge Edwina Richardson-Mendelson, a Family Court judge in New York City who co-chairs the council, sees the group’s role as “a listening mission” to identify how the courts can function better in a state with many immigrants.

“For our clients, you are talking about enabling them to remain here.”
— Theo Liebmann

“While family courts don’t confer immigration status on people, we do play a significant role, and the federal courts have delegated to family courts,” Richardson-Mendelson said. “There are a variety of areas where the determination made by a family court may impact someone’s lawful status … and, quite frankly, it can be a life-or-death determination for many.”

New York has always been a magnet for immigrants, but the recent spike in children 17 and younger has put more strains on the system.

Nearly 6,000 children who crossed the border illegally as unaccompanied minors were placed with relatives and sponsors in the state in the 2014 federal fiscal year that ended Oct. 31, 2014. More than 2,000 additional children had arrived in New York since then, as of Aug. 31.

The bulk of those minors have come to Long Island, with more than 3,000 settling here last year and more than 900 arriving as of Aug. 31.

While the unaccompanied minors face deportation in immigration court, many qualify for a protected status as “special immigrant juveniles,” which puts them on the path to legal permanent residency.

Minors seeking that status must appear before a Family Court judge in their county of residence. State judges issue orders of “special findings,” which include determining the child’s guardianship and whether it would be “in the child’s best interest” to remain or be sent back. The orders are key in immigration hearings.

David Bookstaver, spokesman for New York’s Unified Court System, said the council’s establishment is an acknowledgement of the court’s changing needs. “The reality is laws have changed, situations have changed and we need to make sure we are current, we understand what’s changed,” he said.

Ultimately, the initiative is about giving immigrants equal access to justice, advocates said.

Camille Mackler, legal initiatives director with the New York Immigration Coalition, a nonprofit advocating on immigrant issues, said a push to streamline the court process is welcomed by those who help immigrants. She said “there’s been a lot of confusion” on the role of the family court along with the flood of cases.

Ultimately, the initiative is about giving immigrants equal access to justice, advocates said.

“There’s also the issue of language,” said Mackler, adding immigrants need information they can understand — “be it in a divorce proceeding or in a custody proceeding or in domestic violence cases.”

Hofstra law students in Liebmann’s clinic said they have come to understand firsthand why Family Court cases are critical for immigrants.

Kristy Candela, 25, a third-year law student from Bellmore, said she and her classmates have helped immigrant kids looking to “get a guardian here to take care of them.”

“Anything that will help streamline the process and make it easier for these clients, who’ve already been through so much … is great,” she said. Dana Dohn, 24, a third-year law student from Warren, Ohio, said much is at stake for the immigrant minors, who often are teenagers.

“They’ve witnessed horrific gang violence,” Dohn said. “They’ve seen people be killed in front of them. They are frequently recruited, many of them are gangraped repeatedly and abducted and kidnapped, and they are abandoned by at least one of their parents.”

“These kids have just been through the worst of the worst,” agreed Ivy Waisbord, 25, a third-year law student from Philadelphia. “But they are still so young and, when we get through this process, it allows them to have a new beginning.”

From Newsday, Nov. 4, 2015. © 2015 Newsday. All rights reserved. Used by permission and protected by the Copyright Laws of the United States. The printing, copying, redistribution, or retransmission of this Content without express written permission is prohibited.