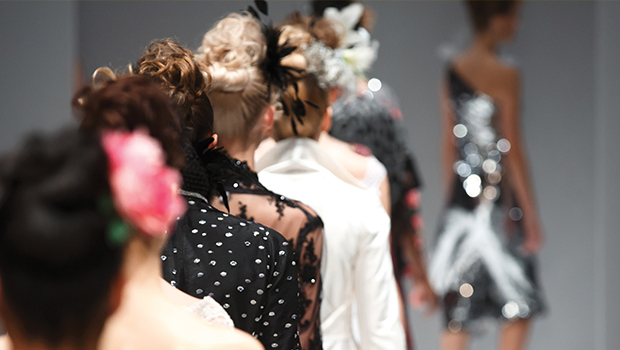 It’s the week before New York Fashion Week, and while models and designers are preparing for runway shows, Elizabeth Henries ’05, Corporate Counsel at DKNY, is busy working with the company’s key global clients, which include high-end department stores and wholesalers.

“Fashion Week is one of the busiest times of the year, and while I don’t often attend the shows, I work behind the scenes on our business,” says Henries. “I get busy primarily because our accounts from around the world are in New York for the shows and it’s when we have management meetings to finalize contracts and close deals.”

“What’s exciting about this industry is that it’s evolve or die and you have to keep changing and trying new things.”

Besides managing partner relationships, much of Henries’ work involves navigating the laws of different countries for DKNY’s international business. “For example,” she explains, “Saudi Arabia’s Shariah law means you can’t have women in our ad campaigns dressed the way they are in our global advertising campaigns, so you have to make adaptations to the local market, including, at times, product-only ads.”

While Henries is based in the company’s New York City headquarters, she works closely with a team in Milan, Italy, and partners in the Middle East, Asia and Europe. “I do a lot of virtual globe-trotting since I am responsible for working with our global sales teams on legal and regulatory matters pertaining to sales,” says Henries. “In this capacity, I work very closely with our team in Milan, where we have an office that operates a showroom.”

Henries didn’t start her legal career in the fashion industry. After graduating from Hofstra Law, she entered the world of Big Law, first at LeBoeuf, Lamb, Greene & MacRae and then at Skadden Arps, where she worked in the firm’s Financial Institutions Group. As a Hofstra Law graduate working at a top law firm, Henries found that she was having to prove herself to get ahead, which helped motivate her to succeed.

“At Hofstra Law, I found a community of very smart, gifted individuals — now talented attorneys,” she says. “I would prefer any day of the week to have a student from Hofstra Law who just puts his or her head down and works.”

After five years, Henries and her husband — who was also at a large firm — wanted to manage their workdays better, so they began looking for new jobs. “Skadden was a great place to work, so I wasn’t desperately looking,” she says. “I was applying for dream jobs. I first focused on publishers of the fashion magazines that I enjoyed reading. It never occurred to me to become an attorney in a fashion company until I saw actual job postings.”

Henries got a call from DKNY and made the leap to the fashion house, where her boss was someone who also came from a corporate finance background and understood its importance to the role.

“What’s exciting about this industry is that it’s evolve or die and you have to keep changing and trying new things,” says Henries. “The industry changes very fast and our focus constantly shifts.” She notes that a few years ago the industry was trying to get its arms around the legal aspects of marketing and advertising on social media, and then it became — and continues to be — handling data security.

“I am fortunate to work in an industry that moves fast and is always changing,” Henries adds. “There is very little opportunity for boredom!”

Dave Gardi ’96: From the Gridiron to the NFL Front Office
Melanie Montenegro ’00: Behind the Scenes at NBCUniversal Telemundo