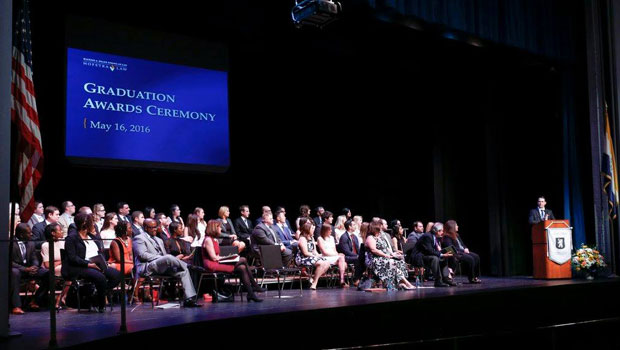 The Maurice A. Deane School of Law held its annual Graduates Celebration and Awards Ceremony on Monday, May 16, 2016. Administrators, faculty members, friends and families joined Hofstra Law graduates at the John Cranford Adams Playhouse at Hofstra University to honor their outstanding achievements as law school students.

Teacher of the Year Miriam R. Albert, professor of skills and faculty advisor for the J.D./M.B.A. Program, delivered remarks, telling the graduates, “You came in as nervous 1Ls and you leave us as capable new lawyers.” Student Bar Association President Justin Worth shared in his remarks, “All that I’ve done for this school, this school has done so much more for me.” And Class Speaker Declan McPherson concluded with an inspirational exhortation: “Remember that the road that led you here was built on faith, fear and family. And it’s that same road that will lead you past every challenge after today.”

The following select 2016 graduation awards were presented at the Graduates Celebration and Awards Ceremony: