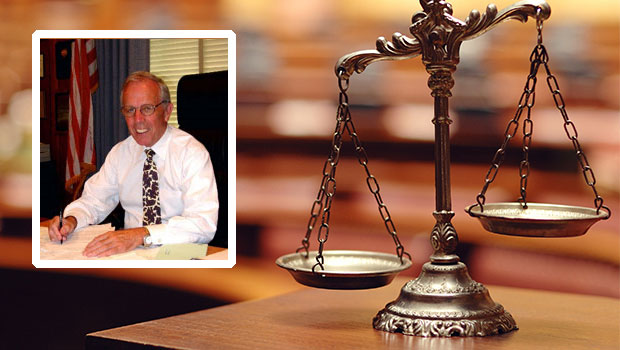 The Maurice A. Deane School of Law at Hofstra University is establishing a scholarship fund to honor former Nassau County District Attorney Denis E. Dillon. Dillon was one of the longest-serving district attorneys in the country, with a tenure that lasted for more than three decades. During that time, he transformed the office into a professional prosecutor’s office, hiring the brightest, most ethical and most dedicated assistant district attorneys.

The Denis E. Dillon Endowed Scholarship will be awarded annually to an entering Hofstra Law student with strong academic credentials, with a priority given to students interested in working as a prosecutor. Dillon not only served as Nassau’s chief law enforcement officer but also worked under Robert Kennedy in the U.S. Justice Department’s Civil Rights Division, handling segregation cases in the South, and later headed up the Organized Crime Strike Force for the Eastern District of New York.

“I am happy that we are establishing this scholarship at Hofstra Law to honor Denis Dillon,” said Hofstra Law Dean Eric Lane. “His respect for and understanding of the extraordinary power of the District Attorney’s Office, and his sense of fairness and justice, make him a model for the young lawyers this scholarship will support.”

Dillon would often tell his ADAs that a politically minded DA is America’s worst curse. To that end, when asked to provide a comment about the Denis Dillon Scholarship, U.S. Congressman Peter King said, “I have never known anyone in politics or government to be less influenced by political considerations than Denis Dillon. Denis was guided entirely by what he thought to be morally correct, no matter what the political impact might be to him.”

Dillon’s longtime executive ADA Patrick McCloskey said, “This overriding philosophy that the prime goal of a prosecutor is to seek justice was the lifeblood of Denis’ office. He was more concerned with justice than with statistics. He always strove to do the right thing. If all prosecutors were as vigilant and ethical as he, we would, in my judgment, have an ideal criminal justice system.”

Fred Klein, a former chief of the Major Offense Unit under Dillon and now a professor at Hofstra Law, said, “I am grateful that I had the opportunity to work for Denis Dillon as a prosecutor. He provided me with the career of a lifetime. I had work that was exciting, rewarding and challenging. I had the opportunity to work and learn from the best lawyers around. He taught me to be fair, compassionate and tough — in that order — and to always do what I considered to be the right thing. I cannot think of a more rewarding tribute to Mr. Dillon than to put his name on a scholarship for future prosecutors.”

The goal for the scholarship fund is to establish it as an endowment in perpetuity. The family and friends of Denis Dillon are now seeking contributions. All gifts are tax-deductible and can be made online or by mail. More information about the scholarship, including remembrances from more of Dillon’s former colleagues, can be found here.

Checks can be made payable to Hofstra University — Maurice A. Deane School of Law, with a note that the donation is for the Denis E. Dillon Endowed Scholarship Fund, and mailed to:

For more information, please email Lisa Berman, associate dean for external relations, or call her at 516-463-4758.