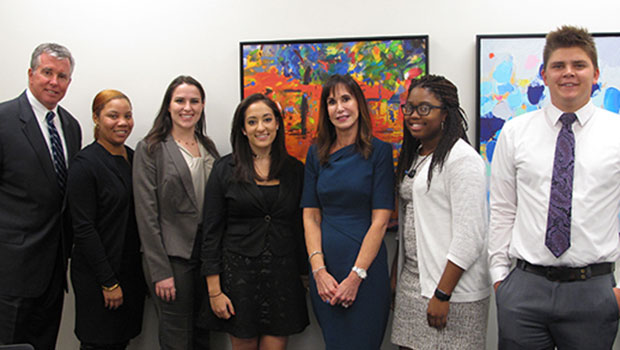 The Nassau County AHRC Foundation and the Center for Children, Families and the Law at the Maurice A. Deane School of Law at Hofstra University announce the launch of a joint effort to assist families in need in obtaining the appointment of a guardian for their child with a developmental disability or delay reaching the age of 18.

Families raising a child diagnosed with a developmental disability or delay often find themselves at an unsettling crossroads when the infant reaches the age of 18 and the child’s ability to make decisions, and to communicate the decisions once made, is severely compromised, necessitating guardianship.

Often, the parents who have provided for the child for 18 years will continue. On occasion, the parent is unable to fulfill the guardianship role.

In either case, counsel is required to represent these families in navigating the path to guardianship, and even for families of moderate means, the expense of retaining counsel is not affordable.

Under the joint effort announced today, Hofstra students, under supervision, will represent the proposed guardian of a developmentally disabled or delayed child who is reaching the age of 18. The proposed guardian is necessary to make medical, legal and life decisions for the child.

The Surrogate’s Court judges in both Nassau and Suffolk counties have wholeheartedly endorsed this joint effort. Each Surrogate has volunteered to set aside a dedicated afternoon — each week, if necessary — to allow Hofstra Law students to participate in these hearings.

In announcing the joint effort, Judge A. Gail Prudenti, the Center’s executive director, remarked, “We are so excited to be partnering with AHRC in such an important effort. Helping the most vulnerable among us has always been a special calling for me, and I am excited to share that passion with the students of Hofstra Law.

I would like to thank our partners on the board of AHRC; Stanfort Perry, executive director at AHRC; Saundra Gumerove ’76, an attorney specializing in 17-A Guardianship who will assist in supervising the Hofstra Law students; and the Surrogates of Nassau and Suffolk counties for their dedication to the project.

In addition to helping these families in need, the results from this joint effort may demonstrate the need for wide reform of the laws governing guardianship. Many courts have struggled with the current flexibility of Article 17-A in dealing with the wide range of capacities of such individuals.”

Stanfort J. Perry, the executive director of AHRC, commented, “Guardianship is out of reach for families who are economically disadvantaged as well as those whose negative experiences with the criminal justice/legal system create emotional barriers to access. This partnership has the potential to help families access the legal safeguards that exist for their family member and further educate families and professionals about issues facing the I/DD community.”

About the Center for Children, Families and the Law
The Center was established in 2001 in response to the urgent need for more effective representation of children and families in crisis. Its mission is to provide interdisciplinary education, community service and research to benefit children and families engaged in the legal system. Through the Center, students are afforded unique opportunities to participate in community service, public policy projects and research. The goal is for the students not only to experience how their legal studies apply in society but also to truly make a difference.

Judge A. Gail Prudenti was appointed as executive director of the Center on Sept. 1, 2015, after more than 24 years on the bench.

About the Nassau County AHRC Foundation
The Nassau County AHRC Foundation is a registered 501(c)(3) charitable organization whose mission is to publicly solicit and receive funds for the benefit of children and adults with intellectual and developmental disabilities (I/DD). Thousands of children and adults benefit from the Foundation’s support to organizations such as AHRC Nassau, the Brookville Center for Children’s Services, Citizens Options Unlimited, Advantage Care Health Centers, and other community-based organizations serving people with I/DD.

Through their partner organizations, AHRC supports services that span across a lifetime, ensuring that the people and families have the resources to live meaningful lives.