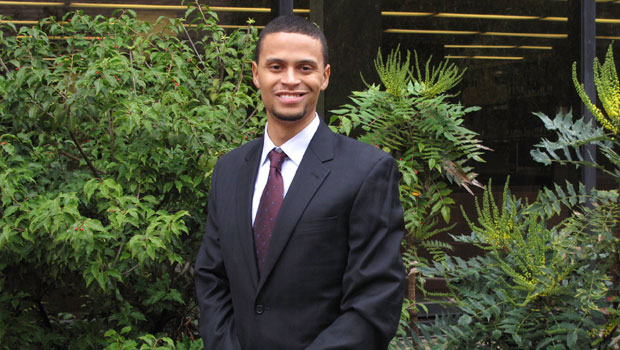 Hofstra Law third-year student Matthew W. Goodison-Orr participated during his 2L year in a Veterans Law Externship (one of the many specialized externship programs offered at Hofstra Law). Working under the supervision of attorney Gary Port, a partner in the firm Port and Sava and a retired U.S. Army lieutenant colonel, Matthew won a discharge upgrade to “honorable” for a pro bono client, a former enlisted member of the Marine Corps.

About a year after starting active duty in 2005, the client was deployed to Iraq, where he was injured by an IED, sustaining a concussion, loss of consciousness and a perforated ear drum with loss of hearing. He was awarded a Purple Heart for receiving those wounds in action and remained on active duty.

In the time after his injuries until his discharge in March 2009, the veteran was the subject of a Meritorious Mast for aiding and treating a severely wounded fellow Marine and was diagnosed with chronic post-traumatic stress disorder and possible traumatic brain injury, but he also engaged in two incidents of misconduct. Because of his misconduct, he received an “other than honorable” (OTH) discharge. He had waived his rights to consult with legal counsel and to present his case to an administrative discharge board.

Matthew was able help his client apply for a discharge upgrade because of a change in the regulations that now allows veterans to upgrade their discharges “based on previously unrecognized” PTSD. After considering all the evidence, the three-member Board for Correction of Naval Records decided that the veteran’s PTSD should mitigate the misconduct he committed and that the discharge should be recharacterized as honorable.

Matthew discussed his experience working on the discharge upgrade appeal.

What is the significance of the upgrade to honorable discharge?
The upgrade restores my client’s access to educational and medical benefits. As a policy, the Marine Corps does not grant discharge upgrades due to the culture of the branch, and as a result of this very low (less than 3 percent) approval rating, many veterans simply do not appeal their discharge upgrades. That being said, the significance of getting this appeal not only filed but approved is not lost on me or my client.

How and why did you get involved in this work?
I got involved with this work due to Professor Jennifer Gundlach. In my 2L year, I received an email about a Veterans Law Externship. Personally, I had always wanted — and still wish — to be a JAG, and after not being accepted into the JAG summer/spring programs, I thought this might be the next best step in furthering my knowledge of military law.

What was it like working with your client?
My client isn’t much older than me; I’m currently 24, and he is 29. We both text more than we email and have plenty in common as two young professionals.

The common idea is that when people hear the word “veteran” they think of their grandfathers or really old uncles; rarely do they think that someone basically the same age as they are could have had those same experiences.

Looking at the facts, you would never think that those things happened to him. But I took away many lessons on how to engage in the hard discussions and how to approach them, which helped me when dealing with other veterans later on.

For me, it was an eye-opener to work with someone so close to my own age while also trying to advocate in a new forum and style, unlike anything I had experienced before.

How was working with Gary Port?
Gary is awesome! He didn’t hesitate to throw me into the fire from day one, but he was always there to answer questions, explain laws or review draft after draft of various documents. Gary was unbelievably involved as a mentor and boss, which I think played an incredibly important role in my development as a successful legal professional.

What type of work do you want to do after law school, and how do you feel this experience helped prepare you for it?
Having wanted to do JAG for so long, working on the discharge upgrade showed me another side of the coin that I hadn’t seen before. Even if I do not pursue the JAG route, this experience still taught me a new writing style, a new way to research and a new way to think, both from the perspective of the tribunal and that of my client.