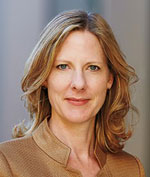 Heather Gerken, the J. Skelly Wright Professor of Law at Yale Law School, will deliver the 2016-17 Distinguished Scholar-in-Residence Lecture, “Progressive Federalism: A User’s Guide,” on Wednesday, Feb. 8, at noon in the Sidney R. Siben and Walter Siben Moot Courtroom, Room 308, at Hofstra Law School. The lecture is open to the public, and no RSVP is required.

The Scholar-in-Residence program annually brings a leading legal scholar to Hofstra Law for several days. Besides delivering the Distinguished Lecture for the University community, the scholar-in-residence typically presents a workshop for the Law School faculty, visits classes, and engages in informal discussions with Hofstra Law faculty and students.

Professor Gerken specializes in election law and constitutional law, and her most recent scholarship explores questions of election reform, federalism, diversity, and dissent. Called the “intellectual guru” of progressive federalism in The New York Times, her work has been featured in The Atlantic’s “Ideas of the Year” section, the “Ideas” section of The Boston Globe, NPR’s “On the Media,” The New York Times, and Time. She has also been a commentator for many broadcast media outlets.

Professor Gerken served as a senior legal adviser in the “Boiler Room” for the Obama for America campaign in 2008 and 2012. Her proposal for creating a “Democracy Index” was incorporated into separate bills by then-Sen. Hillary Clinton, then-Sen. Barack Obama and then-Rep. Steve Israel, D-N.Y., and it was turned into reality by the Pew Charitable Trusts, which created the nation’s first Election Performance Index in 2013.