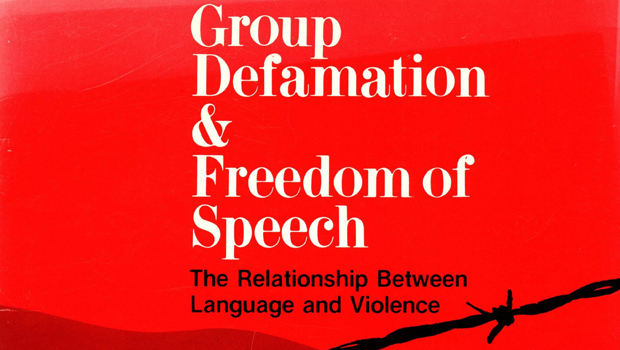 On Aug. 16, Newsweek republished a story that it had first published on June 6, 1988, with the headline “Time to Outlaw Racial Slurs?” The magazine explained that it chose to reprise the story — with the new headline “After Charlottesville, Should Racism and Hate Be Illegal?” — “in light of escalating racial tensions in the United States.”

The story opens by describing a hypothetical trial in a moot court from a legal symposium held at Hofstra University just two months earlier. That three-day symposium, titled “Group Defamation & Freedom of Speech: The Relationship Between Language and Violence,” had been organized by the late Professor Monroe H. Freedman. It featured an address by Elie Wiesel.

Proponents of group-defamation laws are convinced there is a link between racial slurs and violence. According to Hofstra law professor Monroe Freedman, continuing tensions can only fuel wider interest in banning hate speech. “It’s still a minority view,” he says, “but it is germinating.”

Read the full article at newsweek.com.

View the full symposium agenda on the Scholarly Commons at Hofstra Law website.