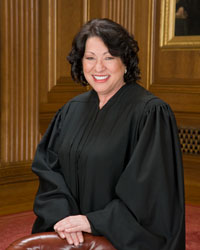 The Honorable Sonia Sotomayor, Associate Justice of the Supreme Court of the United States, will be visiting the Maurice A. Deane School of Law for a wide-ranging conversation about her journey from the South Bronx to the Ivy League to the highest court in the land.

The event will be held on Monday, October 16, from 5-6 p.m. in the Helene Fortunoff Theater, Monroe Lecture Center, South Campus. It is open to Hofstra Law faculty, administrators and students. Law student attendees were selected by a ticket lottery.

“I am honored to welcome Justice Sotomayor to Hofstra Law,” said Judge A. Gail Prudenti, dean of the Law School. “This will truly be a special and memorable day for the members of the Hofstra Law community.”

The program will feature a conversation between Justice Sotomayor and Judge Prudenti, followed by a Q&A session with law students.

Hofstra President Stuart Rabinowitz said: “This is an extraordinary privilege for Hofstra, and an incredible opportunity for our law students to hear firsthand from a jurist whose life and career have blazed an inspiring trail for them to follow.”

She served as Assistant District Attorney in the New York County District Attorney’s Office from 1979-1984. She litigated international commercial matters in New York City at Pavia & Harcourt, where she was first an associate and later partner from 1984-1992.

She then served as a judge on the U.S. Court of Appeals for the Second Circuit from 1998-2009. President Barack Obama nominated her as an Associate Justice of the Supreme Court on May 26, 2009. Justice Sotomayor was confirmed by the U.S. Senate in August of that year.

Prof. Baruch Bush Receives 2017 Kreidler Award From Association for Conflict Resolution
The Appellate Division, Second Judicial Department, to Sit at the Maurice A. Deane School of Law at Hofstra University