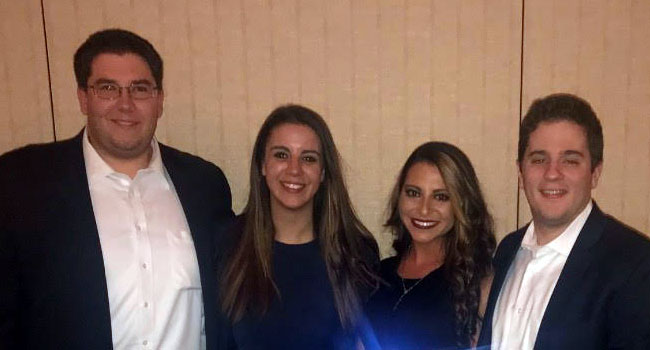 The Hofstra Law team of (from left in photo) Dylan Nesturrick 3L, Gabriella Malfi 2L, Elizabeth Johannesen 3L and Ryan Nelson 3L advanced to the semifinal round of the 2017 Buffalo-Niagara Mock Trial Competition.

The competition, which was hosted by the University at Buffalo School of Law, was held on Nov. 10-13, 2017, in the Buffalo City Court in Buffalo, New York.

About the Buffalo-Niagara Mock Trial Competition
This competition is one of the biggest national invitationals in the country, with more than 40 teams competing each year.

Since 2004, teams from more than 30 law schools across the country travel to Buffalo to compete in this prestigious annual competition. Law students try both sides of a homicide case before experienced judges and trial attorneys who volunteer as judges and evaluators.

After the preliminary rounds, the top 16 teams advance to the final rounds. Awards are presented at a banquet and include honors for Best Opening, Best Direct, Best Cross, Best Summation and Best Advocate.