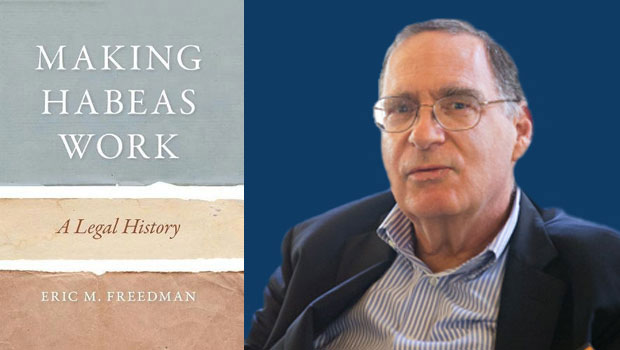 Habeas corpus, the storied Great Writ of Liberty, is a judicial order that requires government officials to produce a prisoner in court, persuade an independent judge of the correctness of their claimed factual and legal justifications for the individual’s imprisonment, or else release the captive. Frequently the officials resist being called to account.  Much of the history of the rule of law, including the history being made today, has emerged from the resulting clashes.

“Eric M. Freedman is one of the most important legal thinkers in the area of habeas corpus, and this book reaffirms that status.”
— Austin Sarat, William Nelson Cromwell Professor of Jurisprudence & Political Science, Amherst College

This book, heavily based on primary sources from the colonial and early national periods and significant original research in the New Hampshire State Archives, enriches our understanding of the past and draws lessons for the present.

Using dozens of previously unknown examples, Professor Freedman shows how the writ of habeas corpus has been just one part of an intricate machinery for securing freedom under law, and explores the lessons this history holds for some of today’s most pressing problems including terrorism, the Guantanamo Bay detentions, immigration, Brexit, and domestic violence.

Exploring landmark cases of the past — like that of John Peter Zenger — from new angles and expanding the definition of habeas corpus from a formal one to a functional one, Making Habeas Work brings to light the stories of many people previously overlooked (like the free black woman Zipporah, defendant in “the case of the headless baby”) because their cases did not bear the label “habeas corpus.”

The resulting insights lead to forward-thinking recommendations for strengthening the rule of law to insure that it endures into the future.

“Eric M. Freedman is one of the most important legal thinkers in the area of habeas corpus, and this book reaffirms that status. Keeping one foot in the present and the other firmly planted in the past, Freedman shows how, without the perspective of history, modern jurisprudence can and does go wrong. A compelling reformulation of our understanding of habeas based on extensive historical research.”
— Austin Sarat, William Nelson Cromwell Professor of Jurisprudence & Political Science, Amherst College

“Grounding his position in astonishing archival research, Professor Freedman provides a definitive account of habeas corpus as function rather than form. Freedman shows that the legal world in which the Framers of the Federal Constitution enshrined the habeas privilege embraced a collection of practices to check the State’s power to imprison its subjects. In an age when governments have become increasingly punitive, Freedman’s comprehensive and readable work provides timely support for the liberty-protecting function of judges.”
— Lee Kovarsky, Professor of Law, University of Maryland Carey Law School

“This impressive work of scholarship by one of the leading national experts on habeas corpus draws deeply on history to expand and enrich the modern understanding of the writ. The book is an invaluable resource for legal scholars, the judiciary, and the practicing bar. Its insights will almost certainly surprise readers, just as they have surprised and informed us notwithstanding our long immersion in the topic.”
— Randy Hertz and James S. Liebman, co-authors, Federal Habeas Corpus Practice and Procedure (LexisNexis 7th ed. & annual supplements)

“Professor Eric Freedman has written a wonderful book explaining the historical and contemporary importance of habeas corpus in protecting liberty. The book is original in its research and also in its analysis, as Professor Freedman explains the role of habeas corpus in a system of checks and balances. This clearly written, thorough examination of habeas corpus is an important contribution to the literature of constitutional law, criminal procedure, and federal jurisdiction.”
— Erwin Chemerinsky, Dean and Jesse H. Choper Distinguished Professor, University of California, Berkeley Law School

View more information about the book on the NYU Press website.