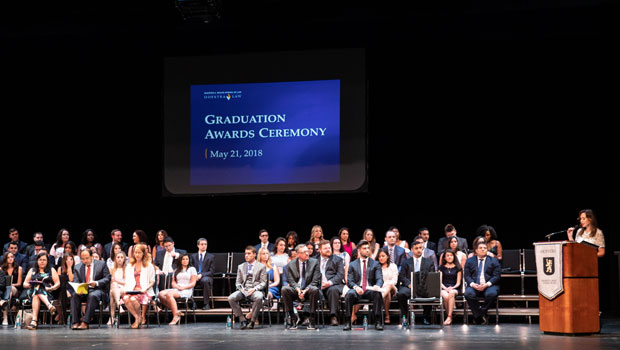 The Maurice A. Deane School of Law held its annual Graduates Celebration and Awards Ceremony on Monday, May 21. Administrators, faculty members, friends and families joined Hofstra Law graduates at the John Cranford Adams Playhouse at Hofstra University to honor their outstanding achievements as law school students.

Teacher of the Year James Sample, professor of law, told the graduates, “I believe in you, and I believe you have the power to change our civic discourse. … When you believe something strongly, stand, disagree, fight, advocate. Just don’t forget to listen.” Student Bar Association President Justin DiCicco reminded his classmates, “Whether it’s a client, a family member or a friend, never forget a lawyer’s goal is to advise, guide and coax someone through a difficult time with a problem.” And Class Speaker Matthew Rosen paid tribute to his classmates: “We have made each other better lawyers to be. I have met classmates who have challenged my way of thinking, and been impressed by the work ethic and persistence of those around me. My peers have pushed me to work harder than I thought I was capable of, and for that I am truly grateful.”

Watch the full Graduates Celebration and Awards Ceremony on YouTube.

Watch commencement speaker the Honorable Janet DiFiore, Chief Judge of the Court of Appeals and the State of New York, receive her honorary degree and deliver the commencement address on YouTube.

The following select 2018 graduation awards were presented at the Graduates Celebration and Awards Ceremony:

The Honorable David A. Paterson Graduation Award in Public Service — Tamaraingsey In and Robert Pope