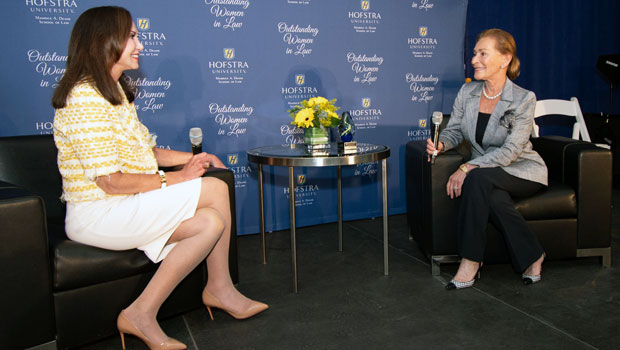 The Maurice A. Deane School of Law at Hofstra University and Judge Gail Prudenti, dean, hosted the Law School’s fourth annual Outstanding Women in Law awards on April 22 at RXR Plaza in Uniondale, New York. Fifty-two women attorneys, judges and professors were honored at the awards and dinner reception. The event was attended by over 400 judges, attorneys, business executives, professors and law students.

Over the past four years, Hofstra Law has honored more than 200 women who have made extraordinary contributions to the legal community. “We are proud to recognize such a diverse and accomplished group of outstanding women,” said Judge Prudenti. “They are shining examples of what it means to inspire, to lead and to make an impact. As advocates for the underrepresented, and leaders in the workplace and community, they are also role models and mentors to empower young women aspiring to join the legal profession.”

In addition to being a trailblazer, Judge Sheindlin is also a mentor and role model. Along with her daughter Nicole, she founded “Her Honor Mentoring,” an initiative that combines the power of youth and the wisdom of experience to inspire young women to reach their full potential.

“It’s thrilling to be surrounded by accomplished women who have found their stride,” said Judge Sheindlin. When asked what advice she would offer young lawyers starting out, Judge Sheindlin said, “be bold, be honest and remember your roots.”

In addition to recognizing exceptional women in law, the Outstanding Women in Law event also raises funds for innovative programs at Hofstra Law, including the Center for Children, Families and the Law.

View a full list of the honorees and sponsors as well as photos from the awards reception on the Hofstra Law website.