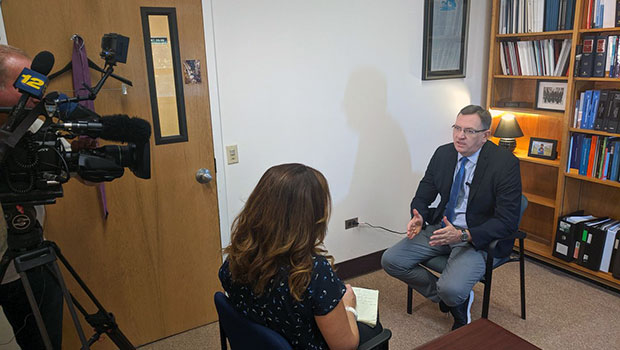 Professor James Sample was interviewed at Hofstra Law for a Sept. 25 News12 Long Island broadcast report the day after the decision by Congress to start an impeachment inquiry into President Donald Trump’s alleged abuse of power.

The aim of the report was to explain what a presidential impeachment means, how the process works, and what consequences the president could face.

In his interview with reporter Eileen Lehpamer, Professor Sample explained that if the impeachment should reach the final phase of going to the Senate for a trial, “you would need every Democratic senator to vote yes and you would need 20 Republican senators to also vote yes. So the mountain here, if we’re talking here about ultimately a mountain where the president is removed from office by impeachment proceedings, is an extraordinary climb.”

View a video of the report on the News12 Long Island website. (Professor Sample’s interview starts 0:39 into the report.)